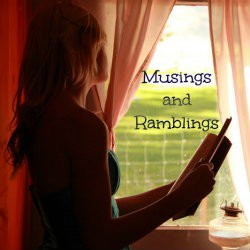 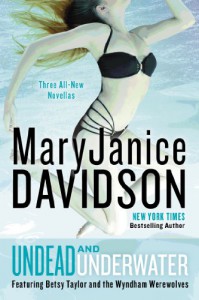 This is a book of 3 novellas all by MaryJanice Davidson. I was very intrigued to see that one of the stories is set from the perspective of Betsy Taylor in the Undead series crossing with the Fred the Mermaid Trilogy. The Mermaid Trilogy was a favorite read of mine and I was excited to revisit old friends from that world. This is the story from which the title of the book gets its name. One of the other stories features the Wyndham Werewolves 20 years in the future and Betsy and Fred make a small cameo appearance. The third story was a completely unrelated story to any of the three worlds.

In Undead and Underwater, Vampire Queen Betsy is called upon by one of her subjects to go to Boston and resolve a situation. There we also meet Dr. Fred Bimm, mermaid and marine biologist, who is asked to help resolve the same situation by another person. The hilarity that happens when these two meet is priceless. Sometimes, especially when an author writes multiple series, you play the "what if?" game and imagine your favorite characters meeting. Well, apparently, Ms. Davidson played it as well, and wrote this story out of that "What if?" If you are fan of either series, you really have to check this one out.

Incomer, is another wonderful play on the "what if?' game. Take the the Wyndham Werewolf pack, who have already been successfully crossing with the Undead Betsy world, add in Fred the Mermaid and then set it 20 years in the future. Here we get a look at how young Lara is handling life as the new Pack Leader. It is a great little glimpse into where some of our favorite characters from the Wyndham series have ended up and just very nicely lets us know that everything turns out great for them. Betsy and Fred have only a small cameo appearance, but it is enough to catch us up on how they are doing.

The final story in the book is call Super, Girl! This short story is set in Savage, Minnesota. We are introduced to Hailey Derry, head of Human Resources and a superhero known as the It Girl. Her two worlds are colliding. Someone keeps sending her cryptic post-its notes at work and she keeps having to rescue more and more people, which keeps her away from work. The point of view keeps changing back and forth between Hailey and Jaime Linus, the new hire and guy that Hailey has the hots for. The story was campy, funny, and yet retained a sweetness to it that was refreshing to see.

Let me say, I love MaryJanice Davidson stories. She writes great dialogue and although the stories seem outrageous and inconceivable to reality, they somehow manage to stay relate-able to the everyday person. I know when I read one of her stories, she is going to leave me with a smile on my face. And she doesn't disappoint. If you are on the fence about the Undead series, the Wyndham Werewolves series, the Fred the Mermaid series or even one of Ms. Davidson's many other series, check out Undead and Underwater. This is MaryJanice Davidson at her best, snarky, campy and just laugh out loud funny. 4 stars on Goodreads.
Tweet